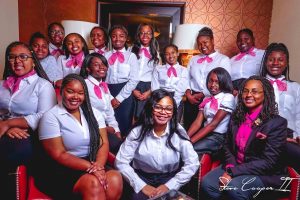 In February 2012, I had the privilege of meeting Tinesia Conwright, the passionate founder and executive director of DETOUR (Depositing Empowerment Through Outreach & Urban Redevelopment) Empowers, when she received a community service award from Urban Pride, at the San Diego LGBT Community Center. I was able to feature her, and her growing nonprofit, in my May 2012 column, while she was still working toward her master’s degree in nonprofit management and leadership, at San Diego State University. Hence, it was very exciting to sit down with Tinesia, six years later, to catch up with her and discuss the growth of the organization. 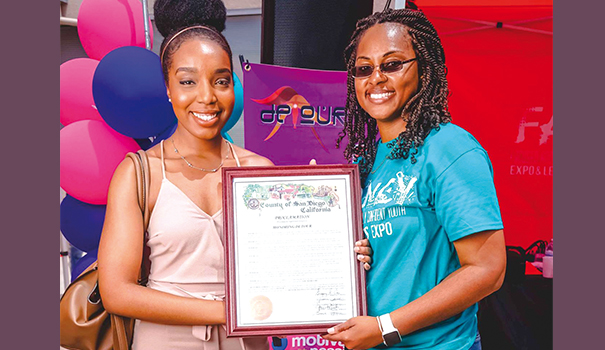 (l to r) Tinesia Conwright and Khea with a proclamation from the County of San Diego honoring DETOUR.
(Courtesy of Steve Cooper II)


In the six years since we first spoke, she has received her master’s, been widely recognized for her groundbreaking work, and sought after to serve in many leadership roles. She also recently married her partner Sakeenah Gallardo. In the midst of the flurry that is often her life, Tinesia still finds great joy in giving back to her community and is seeing the fruits of her labor in a tangible way.

While the FANCY (Focused and Naturally Confident Youth) Expo remains a capstone of the organization, bringing teen girls into contact with leaders and resources that stimulate their personal and professional growth, Tinesia and her team have also developed an ambassador program and a set of scholarships. Both of these support the goal of creating pathways to higher education for young women of color.

“In January 2017, we launched our Ambassador Program, which is our ‘hands on’ approach, where we meet with the girls once a week,” she said. “With our first cohort of 10 girls, half of them were high school seniors, and all the seniors received admission into a four-year university.”

Upon completing the ambassador program, many of the young women utilize their leadership training to start “FANCY clubs” in their schools, which help to amplify the access to resources and mentorship. In addition to the school outreach, DETOUR began partnering with the San Diego County District Attorney’s office’s CARE (Community, Action, Resource, Engagement) Community Center, to reach additional at-risk girls, such as those in juvenile detention.

“There is a level of girl who has yet to be given the tools to receive affirmation- and confidence-building tools,” she pointed out. “Historically, the ‘FANCY girl’ had at least some strong sense of self-identity, and now our program expansion allows us to reach those who have not yet had role models and get them to a starting point.”

Ambassadors that served are eligible to apply for scholarships and also work closely to identify additional school funding opportunities. One of the 2016 FANCY scholarship awardees, Tatiana Jones, was selected from more than 53,000 applicants as a Gates Millennium Scholar. She is receiving a full scholarship (tuition, books, housing) from undergrad to Ph.D. at the school of her choice —Syracuse.

When asked about her FANCY journey, and how it impacted her goals, Tatiana explained, “The FANCY Teen Girls Academy has allowed me to share and voice my opinion on worldwide issues that affect women of color every day. It has also allowed me to be a muse to those who don’t believe that they can make it with all odds against them.

“My goals for the future vary from short- and long-term,” she continued. “Some of my short-term goals are to leave a legacy at my school with FANCY, by creating the project People of Preuss in which students are able to tell their stories about what they have been through and how they overcame it. My long-term goal is to receive my master’s degree in forensic science and hopefully start an organization that helps minorities who are wrongfully accused receive justice through investigation.”

Tatiana is a phenomenal success story, which shows what can be achieved with proper motivation and tools. A success story herself, Tinesia continues to uplift the young women from her community, and is optimistic about increasing the scope of services, including increased linkage to parents and guardians so that they can support their daughters to fulfill their dreams. Because higher education has never been deemed a possibility for generations in some families, building a foundation to even see the possibility is crucial.

To date, more than 1,000 girls have benefitted from the program, including 300 in 2017 alone. The FANCY Expo, which had 50 attendees in 2011, now serves more than 200 annually. Future goals include: creating transitional housing, expanding the paid internship track to employ members while they are in college, and to create a leadership academy. DETOUR Empowers is always seeking mentors, volunteers and board members; especially those who might provide legal advice, financial expertise, and business development guidance.

In the past few years, we’ve begun to see acknowledgement and representations of the power and talent that women of color possess, through films like “Hidden Figures”, the Dora Milaje female warriors of Wakanda in “Black Panther” and, of course, Congressperson Maxine “Reclaiming My Time” Waters. Whether historical, fictional or current, the pathway for women of color to reach their potential is riddled with barriers that many others do not experience. Working with Tinesia and her team, our young San Diego women can map out that “DETOUR” to success!

— Ian Morton has been in San Diego for over 20 years, working in the LGBTQ and HIV fields. He is currently a full-time student and works with the San Diego Black LGBTQ Coalition and the Y.E.S. San Diego LGBTQ Youth Conference. Recommendations for individuals and groups to highlight in Profiles in Advocacy may be emails to iandanielsmusic@gmail.com.