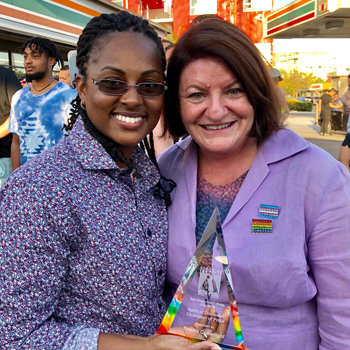 Devoted community leader within the nonprofit and for-profit industries, was born and raised in Southeastern San Diego during the 1980s and 90s, at the peak of gang violence within a neighborhood facing large pockets of poverty and few opportunities for educational advancement and socio-economic mobility. Despite the challenging environment, she found an outlet to express her love for dance through a Christian youth group, where she realized the capacity within youth to impact social change and uplift their peers and community. She discovered her self-worth and met people within her community who inspired her to become the person she is today. She earned her Bachelor’s Degree in Public Administration from SDSU and her Master’s Degree in Nonprofit Management & Leadership from the USD. As she began to rise up the corporate ladder, she recognized a lack of black gay women in leadership roles, and began to make a difference within her community. Passionate about nurturing our future leaders of tomorrow, Tinesia launched, Depositing Empowerment Through Outreach & Urban Redevelopment (DETOUR), which has empowered over 1,000 girls through their Focused And Naturally Confident Youth (F.A.N.C.Y.) Teen Girls programs since inception. DETOUR is a mentoring program created to increase the amount of college-educated girls of color with viable employment in STEAM careers contributing to the economy and to our communities. Since 2016, 100% of the girls graduated from high school, and were accepted into 4-year universities where they are currently pursuing their college journey. Over half the girls entered into STEAM majors. When the San Diego black LGBT community united in 2010 to create an inclusive space, taking over the reins from Ebony Pride – Tinesia was involved in the creation of Urban Pride, a new organization of LGBT people of color who raised awareness of social and health issues amongst LGBT people of color, provided toy drives, and hosted community events. In 2012, when San Diego LGBT Pride decided to add a Hip Hop Stage to their annual festival – Tinesia was hand-picked by Cheli Mohammad to fulfill the role of the 1st Hip Hop Stage Manager, affectionately naming the stage Hip Hop Reloaded – and later “The Movement” to signify the progress made by our black LGBT community. Tinesia also worked with the entertainment team for 3 years at Club Skirts Dinah Shore Weekend popularly known as “The Dinah” – the largest girl party music festival in the world – hosted in Palm Springs. There she worked with the likes of Eve, Lady Gaga, Mary Lambert, Meagan Trainer, and Iggy Azalea. She is now a member of the San Diego Black LGBTQ Coalition, and provided insight to her journey and expertise as a panelist at the organization’s inaugural conference in 2017. Tinesia is a 2015 Bayard Rustin Civil Rights Honoree and currently serves on the City of SD Human Relations Commission and the SD Police Department Chief’s LGBT Advisory Board. She is currently happily married and enjoys spending time with her daughter during visits home from college.